Sauerbraten has over 10 years of competitive history to its name. The list below contains results from nearly all of the various leagues run during that time, ordered chronologically. 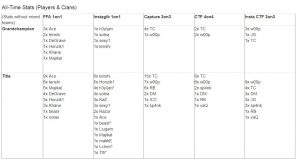 PSL ran from 2007-2010, administrated and organized primarily by oo|shmutz. It was the first Sauerbraten tournament in history, and one of the longest running. PSL laid the groundwork for future leagues with the allvall qualifier format, best of three title matches, and, in the later stages, public polls to decide which maps were played.

SDMC was a relatively brief series of tournaments run by the Dangerous Monkeys clan. While it had somewhat less pomp and circumstance than PSL or SWL, it was a huge success – well administered, with a wide variety of modes and a distinguished list of competitors. 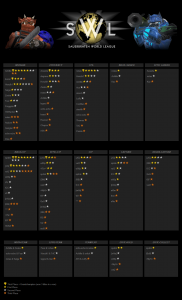 SWL ran from 2011-2013, administrated and organized by Achille|sp4nk|, with technical assistance from Markku and Pisto. Also of note was the first and last nations cup, which was won by Germany, and the SWL insta and effic ladders, won by notas and Acuerta respectively.

Sauerbraten Day of Sobriety (SDoS) was a tournament organized by mefisto in late 2013. It originally planned to host multiple modes and events, but, due to a number of factors (mostly ddos) only managed one – Insta 1v1, won by {QS}ConMan after the later disqualifiaction of Apollon (Bounty).

An eCTF tourney and effic ladder hosted by Acuerta in 2014, aiming to provide much needed competition during the gap between major tournaments.

DKSC ran frequently from June 2014 to May 2015. It is remembered, among other things, for the 3rd Advent effic cup, which was and still is one of the most exciting effic tourneys of all time.

SSL was founded by swatllama and ran for all of 2015. It restored a level of consistent prestige to competitive Sauerbraten that hadn’t been seen since the closing of SWL in 2013.

note: raffael was convicted of using triggerbot in tourneys in 2018-19, and stripped of all later titles. It is not generally believed that he was cheating during SSL, but there is no way to be sure.

A Flagrun tournament, which took place the first time in August 2015.

A short but competitive set of tournaments organized by Frosty and pisto in the spring of 2016.
Results Summary

!sl was a handful of tournaments that ran through the first half of 2017, put together by the !mpressive Squad clan.
Results

The most recent regularly scheduled duel tournament, hosted by Frosty and Origin. Building on the lessons of the last decade, SauerDuels provided some of the best organized and highest quality competition that Sauerbraten has ever seen. It introduced a glicko2 ranking system that delivered a level of nuance and insight previously unheard of in Sauer’s competitive ranking.

* events up through SD #33 took place with the community unaware that w00p|raffael was using a triggerbot. Upon discovery of this, he was disqualified, and rankings and placements were recalculated.

While w00p was initially very successful in SL, they were eventually disqualified from all but the final event due to raffael’s triggerbot usage. The community generally accepts that his teammates were unaware of his cheating, and were robbed of whatever accomplishments they would likely have managed without him.

the notas Summer Fun League was two team events run in the summer of 2019 by notas and the SD staff. The cheeky name does not have anything to do with the quality of the games, which were hard fought and competitive.

In May of 2020, with the world in lock-down due to Covid-19, swatllama hosted Sauer’s 3rd World Cup event. 2020 saw the balance of power in Sauer shift somewhat from the last world cups, with USA winning the gold, Eastern Europe falling to second, and France coming in third, knocking Germany off the podium altogether.

Between the end of Sauer Duels and the release of the new version of Sauerbraten, a number of informal events were held on the beta version of the game for the purpose of testing new mechanics, finding bugs, and playing new maps.