Event Recap
Turnout for the tournament cordezz hosted was massive. 16 people turned up to play some great ffa games. The winner bracket semifinals were Master vs swatllama and Tay vs Frosty.

I picked toxicity against Master, thinking it would be an easy win, but only narrowly won, as Master played spectacularly on there controlling weapon pickups and having constant yellow pressure. In the end, I got a close 2-0 victory over him, since his pick of hator went better for me.

Frosty picked hades against Tay and won it handily. Tay responded by choosing toxicity, winning it by approximately the same margin as he lost hades. Their tiebreaker map was one they both became well versed on during sauerduels: metl4. As anyone who saw Tay play me later could predict, Tay won that confidently. This led to a swatllama-Tay showdown.

Winner’s Bracket Finals
The first set of finals, Tay vs me, had a great set of games. I had the initial pick, and chose ztn. That went better than expected for me, with a 27-7 scoreline. Tay picked his classic metl4, which he dominated on. There were definitely chances for me to come back in, but his constant pressure and great angles at quad fights lead to him getting a commandeering lead. The tiebreaker map ended up being corruption – a pick I was nervous about and didn’t mean to leave in, but thought I would be able to take. I was wrong; his early control proved difficult to break, and in the final 90 seconds of the game, it became clear it would be very difficult for me to come back, knocking me to the loser’s bracket finals against Master.

Loser’s Bracket
After the semifinals, Master had to face Plata, and Frosty faced lagout. Master and lagout prevailed, and then Master beat out lagout to advance against me in the loser bracket’s finals. At that point, it was still a bo1, and all maps were vetoed away except hator, which we’d played previously. While the scoreline was similar to the first game, the level of control I had was higher, and so that led me back to a rematch against Tay….

Grand Final
Tay came into this with a 1 map advantage, and the first pick was mine. Having just played hator against Master, I was fresh on it and chose it for my first map, which went to my favour. Of course, Tay picked metl4 once again. I gained control pretty much in the last minute of that, and began to rack up frags quite quickly, going from a deficit that looked like it would be a solid loss to being 1 frag down with 2 seconds left and finding a freshly spawned Tay at yellow armour… and missing, putting Tay at 2-1 in the series against me.

With my 2nd pick, I picked a safe ztn, since that had gone well for me the first time around, and little was different the next time. This lead to a rematch on corruption… This one went better for me, as this time I was able to take early control, although it was still a contentious one, as Tay’s rifles were landing more often than not, and his unreturned damage was incredibly high. With a decent lead with 2 minutes left, I laid off the pressure and just wanted to maintain the lead, which allowed him some leeway to bring the scoreline back. With a little luck and growing time pressure on Tay though, I ended corruption this time with a lead, and the series victory 3-2.


Thanks to everyone who participated in this huge turnout, and to Cordezz for hosting it! 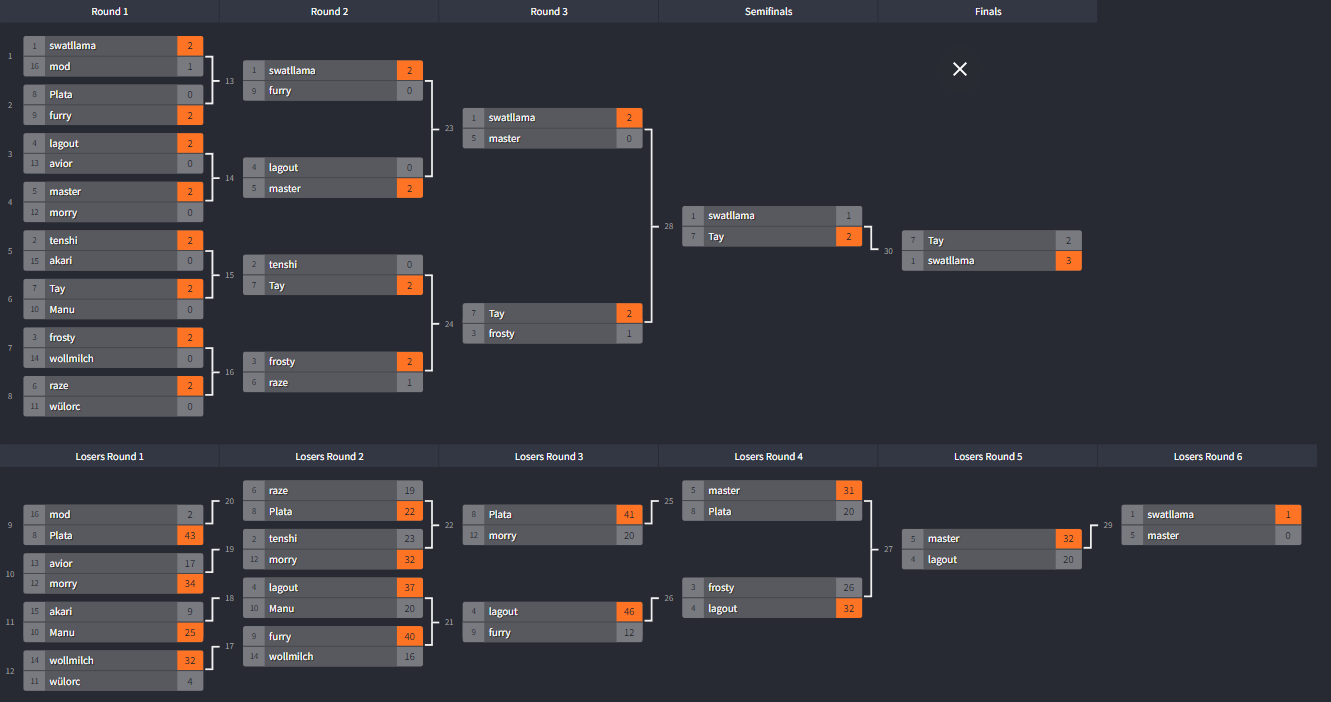