Event Recap
An incredible 23 players turned out for this duel event, many for whom this was their first competitive Sauerbraten event, and for several more, their first in years. There were so many exciting matches that occurred, and I cannot describe all of them without making this post tremendously large, so we’ll skip straight to the semifinals.

Semifinals
Some unexpected semifinals were had: Plata vs Galaxy started with Plata picking his classic and probably now-hated by everyone, ot, on which he led by a wide margin. Galaxy then picked turbine, which he narrowly lost 77-79 to Plata, advancing Plata to the winner’s finals and relegating Galaxy to the loser’s bracket.

Meanwhile, bioweapon, one of the fan favourites going into this, faced off against Cannibal, a new face to many who haven’t been around for a while. Bioweapon handily beat Cannibal by around 20 on both maps, giving him confidence going into the final against Plata.

Winner Bracket Finals
And what a fucking final this was, oh yes! Two aim champions who started off as mediocre noobs in their Sauerbraten career until recently, working their way up to be trained in |DM| under Zeev’s legendary tutelage: The school of “shoot better”, most famously a strategy proven successful during SSL August 2015; the fact that two recent DM graduates were in the finals is certainly of no coincidence.

Plata, being top seed, of course picked ot once again. Bioweapon completely fell apart. We don’t know if it was the nerves or perhaps his Jim Bean was cooling down, but Plata made him look like a fucking noob, beating him 114-75 (for comparison, I lost 80-121 to Plata on ot in our earlier match, and I was eliminated very early). The second match went much better for bioweapon, but time was against him, and while he made a last minute comeback on douze, he could not find the last kill on Plata, and the game ended 74-75 — with Bioweapon headed for the loser’s bracket.

Loser Bracket — what the fuck happened here???
On the topic of the loser’s bracket, some insane games happened here too. Frosty lost 2-1 against Plata in the winner bracket, but then was unexpectedly outfoxed by Kostya – who was obliterated 93-57 against Cannibal in his subsequent game. hades took out lagout, and then faced against his clanmate, Galaxy. While Galaxy performed very well, he was still a bit off hades’ scoreline, finally being eliminated after performing quite closely against bioweapon. This led to another sp4nk matchup of Cannibal vs hades, which hades won 99-94 on memento; But this was an insane nailbiter. The game was completely neck and neck up until the final moments, even going into an overtime before hades managed to pull ahead. The loser bracket’s final, still a best of 1, was hades vs bioweapon on turbine. It ended 107-98 for bioweapon, leading him into a rematch against Plata…

Grand Finals
We were given one of the most amazing grand finals we could’ve asked for from an insta duel event. Plata was given an automatic one map advantage due to his prior victory, leaving the first pick to be bioweapon’s. Having just come off a turbine victory, he instantly picked it, and won 112-105. Plata retaliated by choosing the unexpected ot! None of us, not even our favourite caster notas, saw that coming! However, this ot was different. They played slower, more carefully. Instead of treating bioweapon like the whore you found out gave you the clap, he narrowly scraped a 91-84 victory on bio, with the game never really being set in his favour until near the end. Once again bioweapon’s pick, complex was played. This game was played with the same slower pace that was seen on ot, with both players realizing the importance of this – for Plata, this win would mean securing a 3-1 victory, and for bioweapon, success was a necessity to stay in the running for first place. Bio scraped a 91-86 lead at the end of it, tying them 2-2, with one map left to determine the winner. The map that was picked by Plata for this was carbide.

Now, to my knowledge, the only time plata had played carbide once before the tournament, and then once when I picked it in an earlier match against me and he dominated. bioweapon had a bit more practice on carbide, although it was still scarce; but more importantly, he’d just beaten Plata two out of the past 3 games, and that momentum was not going to let him down. This game also threw “slow and calculating” out the window, with both players playing fast, hitting hard, and racking up kills. In the end, it was 118-112… for BIOWEAPON, taking the series 3-2 for him. 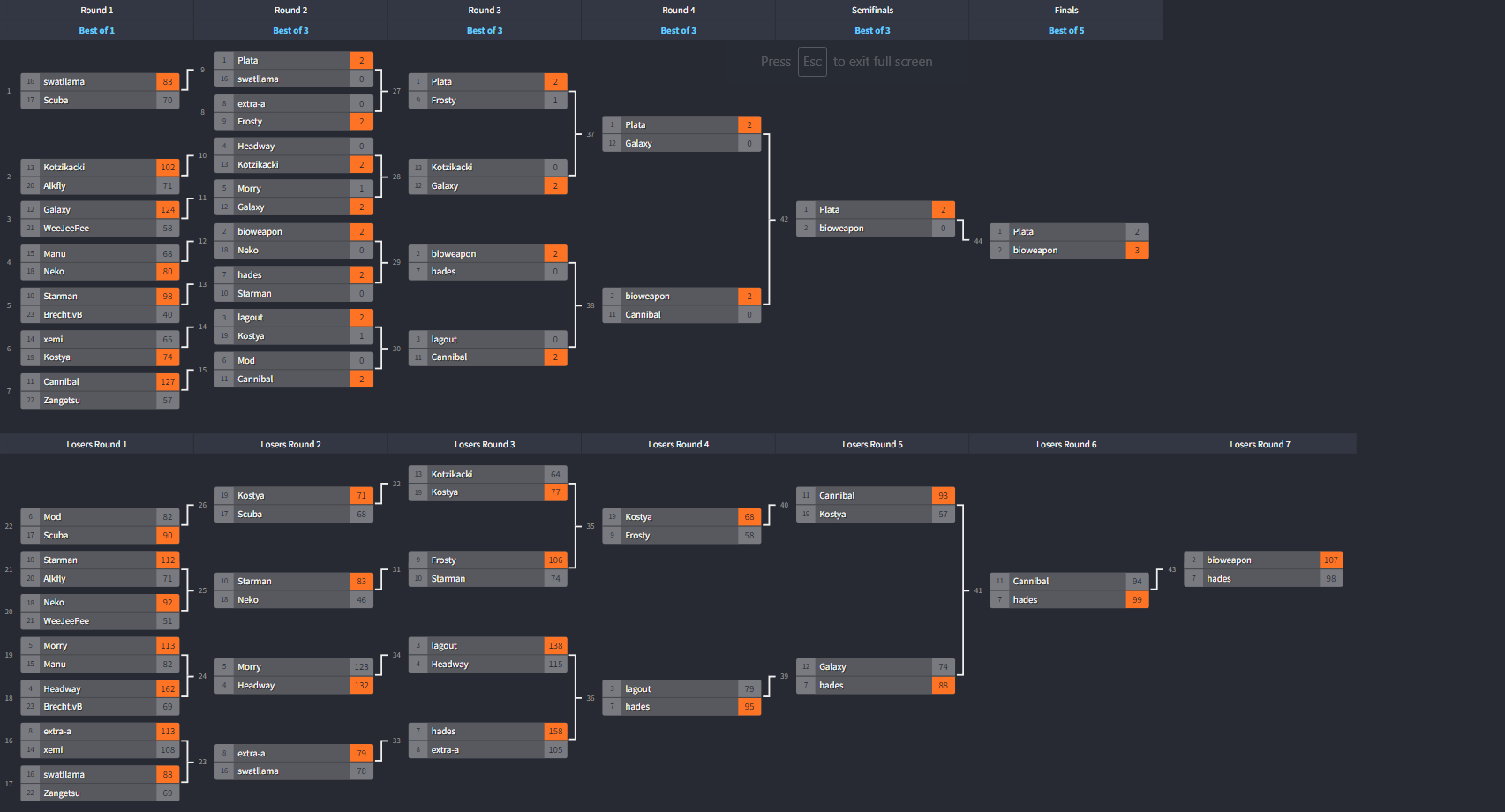 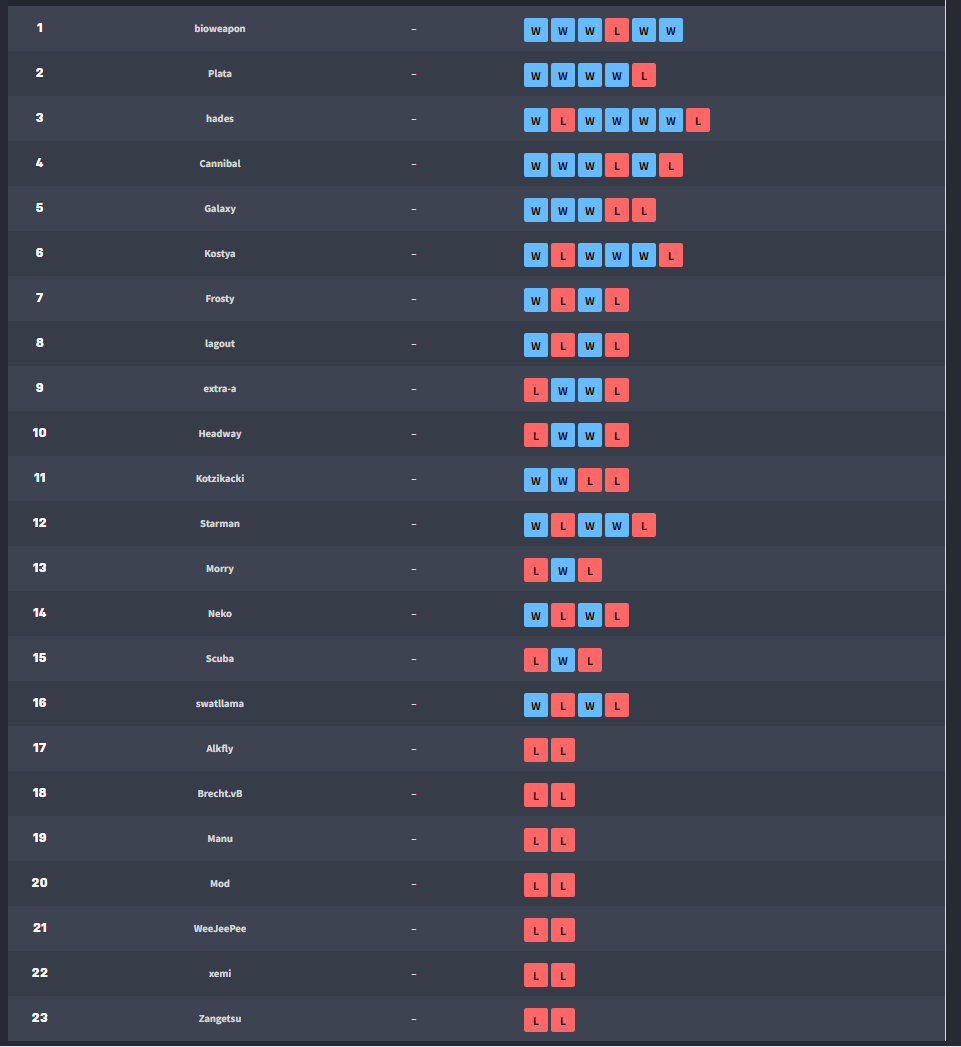