Has this ever happened to YOU? 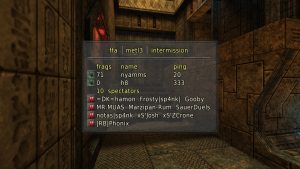 You can read about what JS30 is at the original SW post here:

The eligibility rules have changed a tiny bit since last tourney. Because banning the top 10 would remove some players that quite frankly belong in this tournament, I am instead banning anyone that meets two of three conditions:

If those rules are too confusing, forget I said them and pretend instead that I said ‘top 7 in SD are banned’ because it comes out to the same thing. h8 is also banned for winning last time, but he may instead be invited to participate in a bonus grandfinal against the next winner…. :O

EDIT: as informal signups have progressed, I have decided that rules are stupid and I am just issuing arbitrary bans at this point. starch and Rexus are therefore BANNED for being tryhards and aimbots

The group stage is a bo1 round robin (everyone in a group plays each other), with the map chosen by vetoing from a pool of metl2, metl3, metl4, nmp8, tumwalk, corruption and hades. That means if you only know 4 maps you can guarantee a match on a map you know! If you don’t know any maps… who cares, play anyway!

In the bracket, the lower seeded two players will play the upper seeded player from the opposite group in a bo3 with a ONE MAP DISADVANTAGE, eg they start 0-1. They will get to pick the map however, and the next map is chosen by veto. The 3rd place match is bo1 chosen by vetoes. The final is pick pick veto.

Note: because I expect more from the finalists, the grandfinal will use the entire SD map pool. (+paradigm, +skrdm1). Also if two guys want to play them in the groups and they agree idc, go ahead.

If that was confusing, don’t think about it, just play. You can leave at any time, no stats are being saved. :)